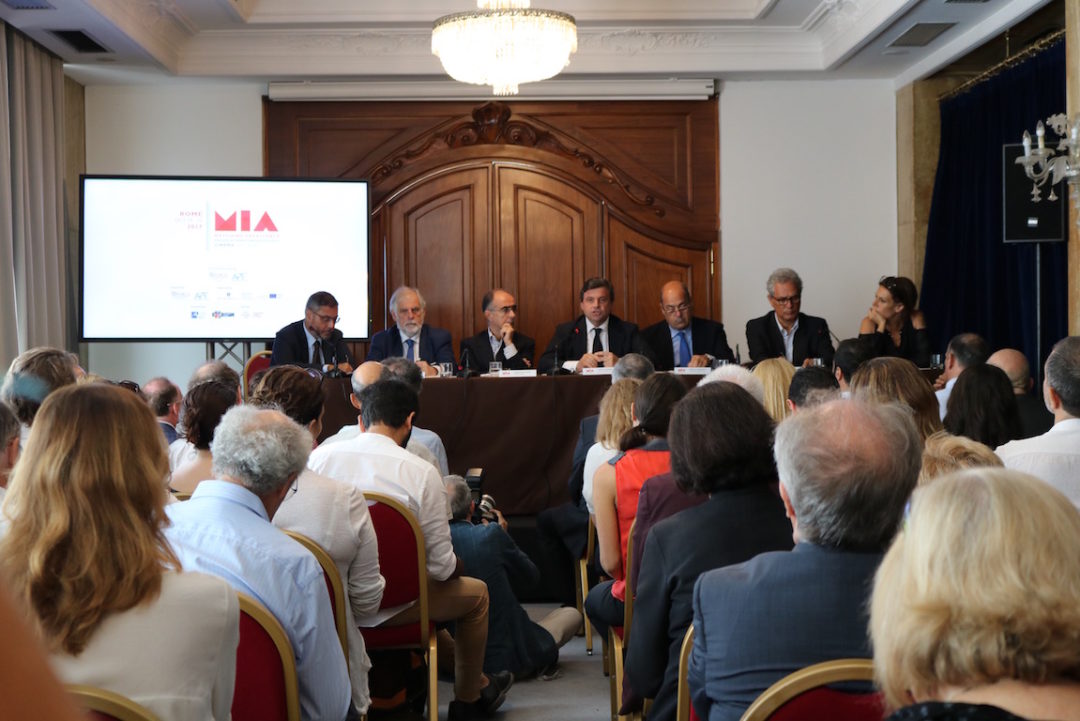 The press conference for the presentation of the third edition of MIA Market|International Audio-visual Market was held at the Hotel Bernini; this year the event remains a solid reality that has found its own autonomy in the international market. After announcing the change of venue for the Market (it will take place at the Barberini District from 19 to 23 October 2017), Director of MIA Lucia Milazzotto confirmed the tripartite structure of the market: three sections (MIA|Cinema, MIA|TV and MIA|DOC) will create a unique reality on the European and international stage in a strategic position between two important realities, the MIPCOM in Cannes and the American Film Market.

The Minister of Economic Development Carlo Calenda, the President of the Lazio Region Nicola Zingaretti, the President of ANICA Francesco Rutelli, the newly elected President of APT Giancarlo Leone and the Head of Cabinet at the MiBACT Giampaolo D’Andrea were present at the press conference and they all agreed on the well-established tradition of MIA; the event is at its third edition and has become a fundamental meeting for operators and professionals in the audio-visual field.
Minister Calenda stated: “The previous editions have been very well because we built the reality of MIA in order that it could work and last. MIA is an opportunity that can’t be separated from the sector-specific policy we are implementing for the audio-visual industry, a policy which aims to strengthen and enhance the role of the Italian industry in the world”.

President Zingaretti said that “it is fundamental to create a friendly environment where our resources can cooperate. We must overcome the Italian tradition of keeping our own resources in competition; the latter must be urged to cooperate because only through the teamwork a lasting and successful growthis possible for the entire field”. “Lazio is the second region in Europe for public investments in the audio-visual field and during MIA we’ll present the next tranche of the Lazio Cinema International Notice. We’ll use MIA as a great opportunity to promote the audio-visual industry as a collaboration between culture and industry and this is an absolute duty for the city of Rome”.

D’Andrea highlighted that “this year’s edition is closely linked to the internationalisation, to the opportunity that our products can circulate more in the international markets. We have before us a business world which is closely linked to cultural content and values that we are trying to promote in order that it becomes a cornerstone of the culture on the European stage”.

Francesco Rutelli, for its part, stated that “the audio-visual industry is a vehicle for our cultural values, as well as business”; Giancarlo Leone emphasised that “MIA is a common ground between the development of audio-visual sector and the International Market. It’s important that Italy works as a system in order to create an audio-visual culture”.