MIA, the new panel on NFT and Audiovisual 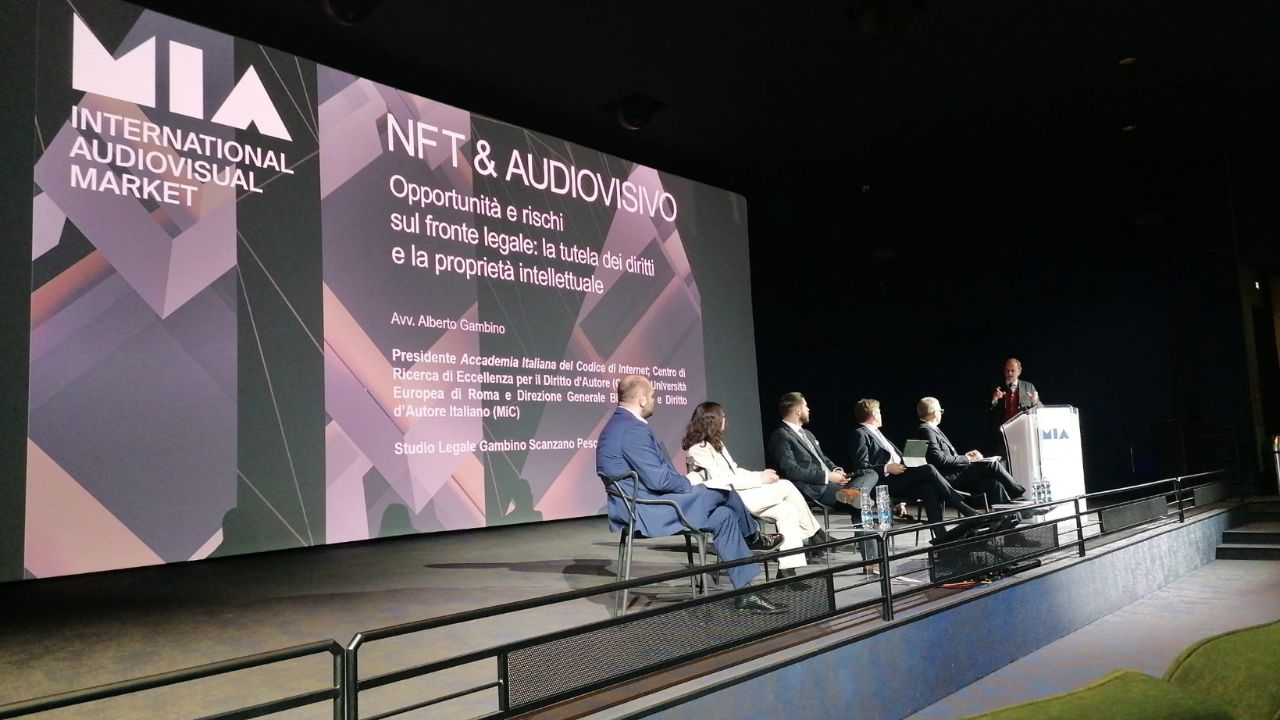 The MIA and the Ministero delle Imprese e del Made in Italy organised the event, which focused on the potential and dangers of this new technology.

The panel was opened by a welcome from Gaia Tridente, Director of MIA, who as hostess introduced the various speakers.

The first to take the floor was Francesco Rutelli, who emphasised the importance of this technological development for the sector: “an industry such as ours in the audiovisual sector cannot but address and discuss issues such as this”.

Giancarlo Leone also focused on the multiple potential of a tool such as NFT: “The issue of resourcing and funding in our sector is fundamental, and the NFT tool can be a great opportunity”.

Donatella Proto, Dirigente, Divisione I – Comunicazioni elettroniche ad uso pubblico e privato. Sicurezza reti e tutela comunicazioni. Comitato Media e Minori – Ministero delle Imprese e del Made in Italy, opened the first part of the panel devoted specifically to NFT and Audiovisual by focusing on the need to educate the supply chain on this topic: “We need to raise awareness of these new technologies and collaborate with the academic world to explore all the opportunities for the creative industries sector. We need to start familiarising ourselves with these words related to new technologies, such as the metaverse, in order to fully understand the risks and benefits”.

The Masterclass was then held by Samuele Fraternali, Director of the Digital Content Observatory of the Politecnico di Milano, and Valeria Portale, Head of Innovative Payments Observatory and Blockchain of the Politecnico di Milano. Samuele Fraternali framed the current state of the audiovisual industry, in which the most popular contents remain those related to entertainment, information and music. The market is based on consumer spending (subscriptions) and advertising revenues. But increased competition has fragmented the offer and is increasingly orienting it towards the ADV-based model, which was thought to be outdated. From this perspective, new technologies such as artificial intelligence, NFTs and the metaverse make it possible to increase the production of content, ensure digital ownership and create environments for new types of enjoyment. Fraternali also emphasised that “audiovisual is a world in great evolution, starting from the type of fruition and the devices used, and this is important to understand how to reach the consumer, but the smart TV remains a central device”.

Valeria Portale expalined the significance of the phenomenon: “We cannot ignore NFT. In 2022 as much as USD 28 billion will be transacted by 8 million people worldwide, and we are only at the beginning of a great transformation”. She went on to discuss the relationship with blockchain technology and its applications, especially the influence they will have on the cryptocurrency market and the development of the metaverse. Various companies have already recognised the possibilities that these new technologies offer: Disney has developed NFTs in collaboration with VeVe that guarantee a subscription to Disney+ as a way of building customer loyalty.

After the Masterclass, the floor was passed to Avv. Alberto Gambino – Presidente dell’Italian Academy of the Internet Code; Centro di Ricerca di Eccellenza per il Diritto d’Autore (CREDA), dell’Università Europea di Roma e Direzione Generale Biblioteche e Diritto d’Autore Italiano (MiC) who introduced the second part, dedicated to the application of copyright for digital and virtual products. Gambino explained to the audience the differences between a technological title, the NFT, and a legal title: the former can only provide “a semblance of primacy to copyright”, as before a judge they will not have the same value as on the web; rather, the utility lies in “establishing the number of NFTs to be disseminated in the market”, in the possibility for the subject to create a limited circulation.

At the end of the introduction, a lively debate of a juridical nature opened between Avv. Francesco De Rugeriis, of Andrea Rizzi & Partners, Avv. Raffaele Giarda, of Studio Baker McKenzie, Avv. Luca Pardo, of Ontier Italia, and Avv. Chantal Bomprezzi, of Studio Legale GSPB, all moderated by Fabiano Taliani, Co-Founder and CEO of Acta Fintech, followed by questions from the large audience present.